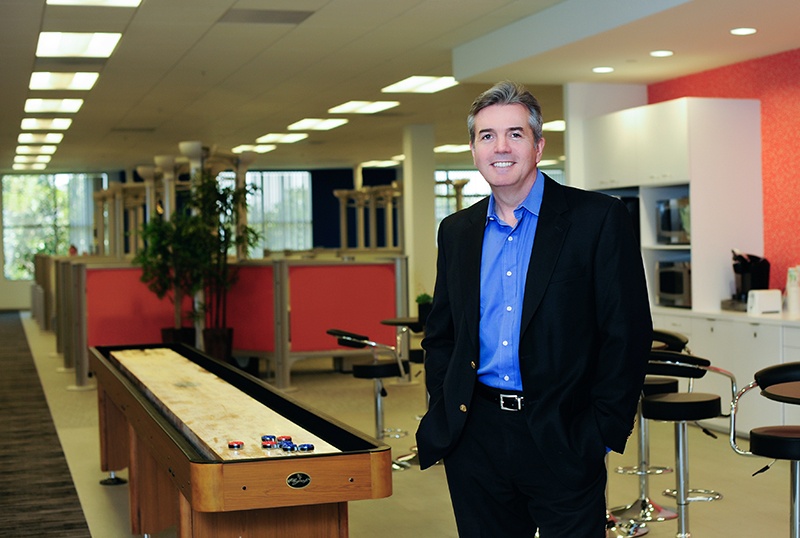 Mavenlink’s Founder and CEO, Ray Grainger, has recently been featured in Bruce Harpham’s book Project Managers at Work. In the interview below, you can learn more about how Ray got involved in project management, and most importantly, how Mavenlink came to be.

About Project Managers at Work

Project Managers at Work is a book by Bruce Harpham, PMP, that includes 25 in-depth, candid interviews with notable project managers, such as Mavenlink’s Founder and CEO, Ray Grainger. Discover how project managers work, what they do, how they adapt and make decisions, how they inspire and motivate others, what career lessons and advice they can share, and how they landed their current jobs either as proejct managers or in more senior positions thanks to their success as project managers.

Bruce Harpham: In the management consulting field, what were your experiences with project management?

Ray Grainger: Starting my career with Accenture had several benefits. It’s a good mentoring organization. You learn a lot from your immediate supervisors who are close to you in age and therefore have recent experience with your type of work. You learn supervisory skills, managing people, communication, and related foundational skills to be a good manager in the context of client services. Asking good questions, managing tasks, and getting clarification are some of the other skills you learn over the first four to six years at the firm. It takes about that much time to become a project manager in the organization.

Harpham: What kinds of projects were you involved in with Accenture?

Grainger: My early projects were technology related—applying technology in large companies. In my case, it was in the aerospace and defense industry. In the late 1980s, the industry was going through the first wave of MRP [material requirements planning] implementations, the predecessor to ERP [enterprise resource planning]. This technology supported a broad range of planning and execution in manufacturing in the aerospace and defense industries.

Harpham: Would this be Lockheed Martin, Boeing, or Airbus? Those kinds of companies?

Grainger: Yes, exactly. Northrop Grumman Corporation was my big first client when I joined Accenture out of college. I was working on large- scale, complex manufacturing, planning, and execution systems.

Harpham: Was that your first exposure to the aerospace industry?

Grainger: Yes, it was the first time I had worked in that industry. I had worked on large-scale projects prior to joining to Accenture. I had worked with the National Science Foundation in Antarctica earlier. Each season, there was a portfolio of projects. It’s a whole different experience down there. In that environment, you have significant resource constraints and you are working with people from around the world. I learned how to operate in large-scale projects and I found that work interesting. I had to collaborate with new people I’ve just met and work together to get a project delivered.

Harpham: What was it like to get work done in this extreme environment? What did you work on?

Grainger: I worked on many projects while I was there—some took several years and others were short term. The longer-term projects were a challenge because you had to take hiatus for part of the year. It was dark and you couldn’t get anything done.

One notable project was to build an emergency camp at the South Pole. Each year, there is a winter group that keeps the South Pole station operational and does some winter-related science work and experiments. In case the main station goes up in flames, they need a backup place to live for the rest of the winter.

The team and I built an emergency camp that needed to support about seventy people for the winter period—about four months—without any support from the rest of the world. We needed to figure out what types of facilities were needed. Logistically, it was very interesting. We prefabricated much of the project deliverables at another location, dissembled it, put everything on giant sleds and then on a C31 airplane. We had to get it done on time—there’s no flexibility on schedule in that world.

It was also interesting to work with a variety of disciplines like carpenters, plumbers, and so forth. None of them had ever worked together and they had to come together quickly. There was no room for failure. Everybody knows that we had to succeed—there is no other choice. The deadline is fixed and there is no way to get more resources. It forces you to be resourceful and get along well with others.

The people you have on the team are also fixed—you can’t bring in someone new! You’re not only working together, you’re also living together. You’re in the same environment with the team twenty-four hours a day. I encountered real differences between people but I had to find a way to work through that.

Harpham: It’s clear that you have succeeded in different environments. First, it was Antarctica. Then you moved into management consulting. Today, you’re running a project management software company. How do you navigate the transition from consulting to the software field?

Grainger: As you move through different career stages, you gain different skills and ideas that you put into your career “knap sack” through the journey. Looking at the first consulting projects I did at Accenture, I took several skills away from that. I learned about project metrics—tracking time, the importance of accurate tracking, and estimation methods. Those insights were independent of the specific industry I was working on.

As you move up in your career, domain expertise becomes very important. In the aerospace and defense industries, that may mean learning the manufacturing process and how it will be impacted by technology projects. After six or seven years in that aerospace and defense, I moved to another industry. That transition was partially driven by a substantial decline in US defense spending in the early 1990s.

We applied the insights we learned from aerospace and applied it to the high-tech industry generally. For example, I can apply the same framework to manufacturing network routers for Cisco. It also applies to building and managing the lifecycle of software products. I migrated from big industrial manufacturing to fast-paced high-tech manufacturing. That was a transition for me from a domain perspective.

That said, I always had expertise in technology deployment. I knew a lot about software from that work. As I moved into the high-tech field, I acquired clients in the software industry. That included clients like BAE Systems. You can apply similar processes—product management and design—to a different field. You can always find analogs between your experience in the past and the current domain you’re working in.

Over nearly twenty years, I was exposed to software companies on various consulting assignments. Those experiences informed my approach when I decided to run my own software company.

Harpham: As you described your industry transition, I’m reminded of the concept of the “peace dividend.” The idea that defense spending could be reduced after the Cold War and those funds could be put into tax cuts or other spending. In your case, it was a dividend of knowledge that you could apply to other industries.

Grainger: Yes, I was able to transfer those ideas and processes elsewhere. The aerospace and defense industries have excellent processes to ensure quality and reliability. The industry also has a high need for project control and accounting—funding was always well understood in that world. All of those skills were transferable to my current work—building software for the services industry.

Harpham: Let’s turn to the origins of Mavenlink. How do you come to start the company? What was the first year of Mavenlink like?

Grainger: It was a white-knuckle experience for that first year!

Prior to starting Mavenlink, I invested in an enterprise knowledge management company called InQuira, through Accenture Technology Ventures. I joined that company as the Executive Vice President of Professional Services and Strategic Alliances, with the idea that I would later start my own software company.

When we decided to start Mavenlink, it was the fall of 2008. I persuaded my co-founders, Roger Neel and Sean Crafts, to join me and we were excited. I sold some of my Accenture stock in order to fund the business with seed capital. Roger left InQuira shortly after I left the company. He got married, left on his honeymoon, and then came back to work on the company. Two weeks later, October 2008 arrived and everything started to crater.

Fortunately, the timing went well in one respect. We had set up our seed capital earlier in the year before the stock market took a dive. We had sold while asset prices were high and had a lot of cash on hand. We dodged the bullet from that perspective—had we sold assets later in the year, there would have far less to work with in getting the company underway. In the broader environment, venture capital was drying up fast.

In January 2009, we started to develop the product. At the same time, the financial crisis and recession were underway. We took our seed capital and spread it across multiple bank accounts so that no single account was over the FDIC limit for deposit insurance. There were worries we could lose money if a bank happened to go under. It was a wacky experience! On the other hand, certain expenses became much more affordable. We could take flights within California for about $29 each way on Virgin America. And get a hotel room for $59 a night. We were able to stretch our capital a long way.

You have to remember that we didn’t know how long the recession was going to last. Some thought it might become a depression. We were committed to building the company and going for it. We made sure to handle money carefully throughout, however.

By July 2009, I remember talking to my co-founders and saying, “Well, the world didn’t end. It looks like the recovery is starting. Let’s keep building our business.” The first year was tough!

Harpham: When did the first paying customers come in?

Grainger: We had the first paying customers in January 2010. During 2009, we were building the product. We had to define the breadth and boundaries of the product. How many business processes were important to cover? We went through a lot of product iterations based on feedback from the market during the first year.

To learn more about Ray Grainger and Mavenlink, check out the second part of this blog series, to be published later this week.

Next up in In The News