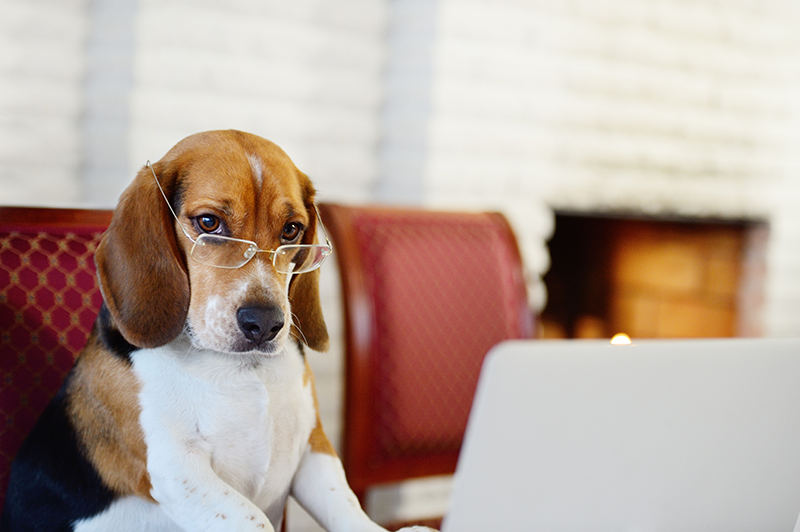 It has never been a secret that dog is man’s best friend. However, said man (or woman) typically spends 40+ hours a week in an office, sans ‘best friend’. The good news is, companies are catching on to the trend that allowing dogs in the workplace may be the tool required to reduce stress and increase satisfaction amongst employees.

For business owners or managers debating whether this trend is rooted in any data—and more importantly, if it would have a positive impact on your company— we’ll share what some of the industry’s thought leaders have to say about dogs in the workplace. We’ll let heavyweights like Entrepreneur, the Economist, and NPR weigh in on what all the fuss is about when it comes to letting the dogs into the office.

Who thought an office dog was a good idea?

Therapy dogs are a popular form of rehabilitation and are seen across a number of organizations working with patients dealing with trauma to those with disabilities. Thankfully, extensive research has been done to unveil the correlation between therapy animals, increased happiness, and reduced stress.

In recent years, the positive impact of dogs has been popularized, and companies are leveraging the animals as a way to boost morale, happiness, satisfaction, and dedication. A new survey conducted by the American Pet Products Manufacturers Association shows nearly one in five companies allow pets at work. So, let’s take a look at why so many companies find themselves with furry friends running around the halls.

According to The Economist,
“Having dogs in the office can enhance collaboration amongst employees.”

The article discussed a study that measured the correlation between allowing dogs in the workplace and effective collaboration within teams. This study brought individuals together in a group setting, and they were then given a team challenge that required positive communication and collaboration tactics. The study found that “those who had had a dog to slobber and pounce on them ranked their team-mates more highly on measures of trust, team cohesion and intimacy than those who had not.”

According to Entrepreneur,
“Dogs can have a significant impact on employee stress levels.”

According to NPR,
“Even non-dog owners experienced reduced stress when dogs were allowed at work.”

According to the Huffington Post,
“Allowing dogs at the workplace will lead to increased morale and better retention rates.”

The Post discussed a survey conducted by the Banfield Pet Hospital to measure the correlation between happiness at work and a pet-friendly office policy. “Overwhelmingly, responses indicate that pet-friendly workplaces are viewed as highly positive, boosting morale, contributing to talent retention and providing employers with a competitive edge in the recruitment process.”

In another article by NPR,
“Simply seeing a dog could enhance cooperation amongst co-workers.”

NPR highlighted a study on dogs and cooperation, “They tend to see that the dogs increase co-worker cooperation and interaction, particularly when people would go by and see the dog just to visit,” says Randolph Barker, a professor of management at Virginia Commonwealth University.

Here are some more quick stats from the American Pet Products Survey:

Still wondering if you should switch your office to a pet-friendly workplace? Take a survey, do a trial day, or maybe just wait this trend out if it’s not for you. If dogs wouldn’t mesh well with the office there are plenty of other ways to increase workplace satisfaction. Check out the blogs below for more on workplace happiness!

Want more info on how collaboration in the workplace?
Download our free eBook on How to Win at Collaboration

Next up in Productivity